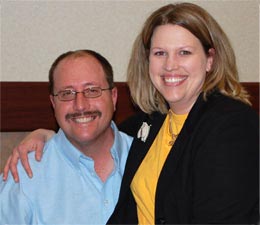 John and Shelly Tiefenthaler are the current owners of Tiefenthaler Quality Meats (formerly known as Food Locker Service) which is located north of Holstein, Iowa on Highway 59. John began his sausage making and meat cutting career during his senior year of high school in 1981 when owner Bob Bagenstos gave him a job. John soon realized that he had a future in the meat processing business and became Bob’s partner in 1983. John became sole owner in 1991 and Bob stayed on to keep “teaching” John all he knew about the meat cutting business until his retirement in 1996. John’s wife Shelly joined him in the business in 1996 and together they have seen many changes in the meat industry and in their business.

The meat processing plant had been in business since 1942 but it was getting too small and with the many changes in the meat inspection the Tiefenthaler’s decided to look for a new location and build a new meat processing plant. The new location was purchased in 2003 and construction began with the new state inspected meat processing plant opening in May 2004. Along with that came the addition of their many award-wining products sold in their retail store under the brand name of Tiefenthaler Quality Meats. John and Shelly have competed in many cured meat championships locally and nationally and one of the resulting products that has gained recognition and are sold statewide in local grocery store chains has been the No Mess Chili Dogs®. No Mess Chili Dogs® are a hot dog with chili and cheese all inside! Another product the Tiefenthaler’s are famous for are their Skinless Bratwurst, which boasts 7 flavors to date.

If you visit Holstein and leave without stopping at their meat retail store, you are missing out! John and Shelly have many other award-winning products for sale and are happy to have you sample anything you might want to try. To see all the awards the Tiefenthaler’s have won in the past few years click here.

Get your orders submitted now for pick up

Tiefenthaler Meats will be closed